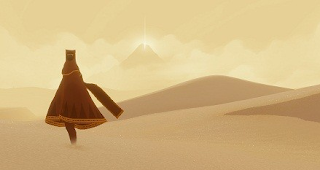 On Journey and Destiny

There’s a strange contradiction that I’ve been wrestling with for a little while. I thought that Journey was an absolutely beautiful and wonderful game. It even won eight awards at DICE this year, including “Game of the Year” and “Outstanding Achievement in Online Gameplay”. But here’s the thing: I think I might somehow be the only person in the world that absolutely hated Journey’s multiplayer system. If you haven’t played Journey, the multiplayer system works like this: you start playing the game as if you were playing a single-player game, and the game matches you with someone else who’s playing where you are.